Connect with us
Did You Know?
Santa Cruz, California has a place where a cabin sits on a slope in a way that makes you feel as if you are always leaning forward.
National Museum of Funeral History.  The National Museum of Funeral History is in Houston, Texas and features one-off coffins, and other funeral memorabilia. John Paul II's bulletproof pope mobile resides here!
This handheld toy is known as the Bop It. It was an audio game which featured a series of commands with buttons, pull handles, twisting cranks, and switches in which the pace would speed up as the player progressed.
Former NBA star Allen Iverson held some impressive stats on the court during his 14-season career. He earned the nickname “The Answer” during his first season with the Philadelphia 76’ers, becoming ‘the answer’ to the 76’ers problems. 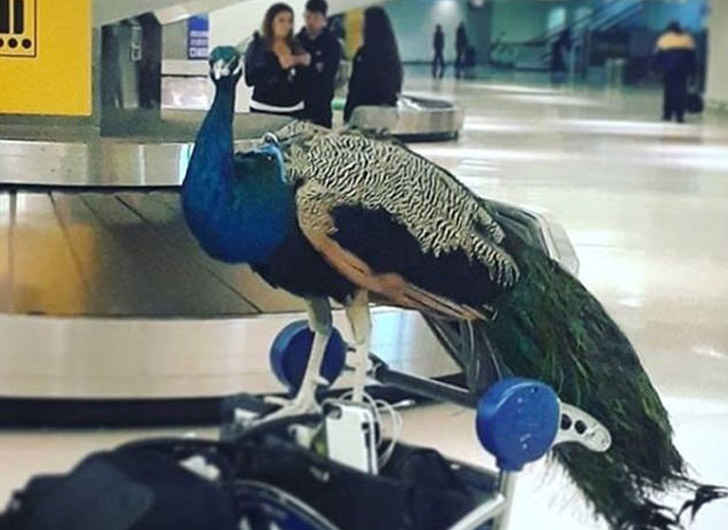 A woman trying to fly on United Airlines with her emotional support Peacock was blocked from a Newark Airport flight over health and safety concerns.

According to The Telegraph NYC based performance artist Ventiko had purchased a separate seat on a United Airlines flight from Newark to Los Angeles for her emotional support peacock named Dexter.

Unfortunately for Dexter and Ventiko, United Airlines would not allow the bird on the plane.

United Airlines released a statement saying the passenger had been told in advance her pet peacock would not be allowed to travel, adding, “We explained this to the customer on three separate occasions before they arrived at the airport.”

“We know that some customers require an emotional support animal to assist them through their journey,” a spokesperson for United said in a statement. “In order to ensure we provide the best service to everyone on board our flights, consistent with government rules we currently require these customers to provide documentation from a medical professional and at least 48 hours advance notice.”

@kumathedestructor took this great shot of me at #newarkairport today. Spent 6 hours trying to get on my flight to LA 😤🐣 (after following all required protocol) Tomorrow my human friends are going to drive me cross country! Keep an 👁out for us! 🌈 #bestroadtripbuddy #dexterthepeacock


Dexter, who has his own Instagram account, informed his followers of the events with his owner writing, “Spent 6 hours trying to get on my flight to LA (after following all the required protocol) Tomorrow my human friends are going to drive me across country.”

Stop over in #indianapolis to visit the Grandparents. 🐣❤️


The bird later informed its over 10,000 follower it had made a pitstop to visit grandparents in Indianapolis.

The peacock on a plane thing was such an obvious stunt, but his name is Dexter so now I’m following him on Instagram like a big, fat sucker.