Vinicunca Rainbow Mountain.  While there is no explanation for this phenomenon, these mountain tops in Peru are truly a sight to behold.
Mendenhall Ice Caves.  Scientists are baffled as to why these ice crystals in this cave in Alaska are different colors.  There is a growing concern of how global warming will affect these caves.
Oneuli Beach.  Black sand beaches like this are located in Hawaii, in the USA, and are formed by recent volcanic activity. 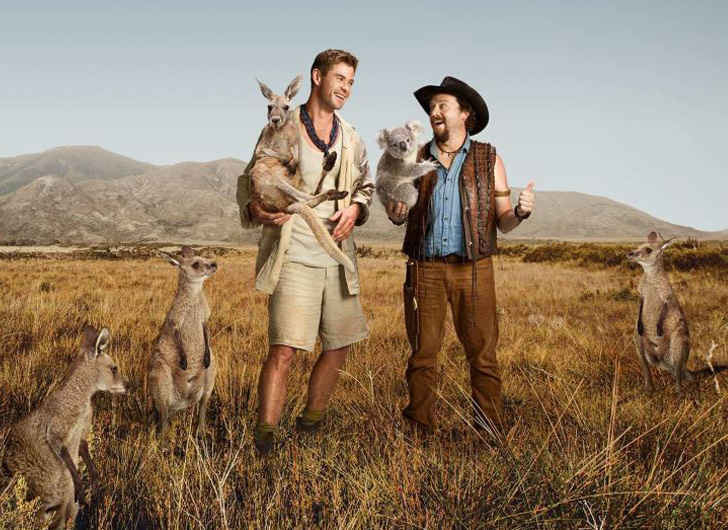 The wait is over. Watch the full official DUNDEE trailer right here. It's the surprise no one saw coming (unless you've been on the Internet during the past two weeks). Visit https://t.co/kadAyLFwZh for more. #SeeAustralia #DundeeTourismAd pic.twitter.com/kxmGItY8tV

As the official celebrity ambassador for Tourism Australia, Chris and American actor Danny McBride appeared in the first ever Super Bowl tourism ad that aired in all markets. According to the Sydney Morning Herald the ad is part of a $27 million Tourism Australia campaign targeting U.S. travelers.

The Dundee: The Son of a Legend Returns Home ads also include appearances by fellow Aussie stars Hugh Jackman and Margot Robbie.

The fake Crocodile Dundee movie trailer had many believing a sequel to the 1980’s hit was in the works! Sadly for Crocodile Dundee fans it’s just all part of an effort to designed to make Australia one of the top destinations for Americans to visit by 2020.