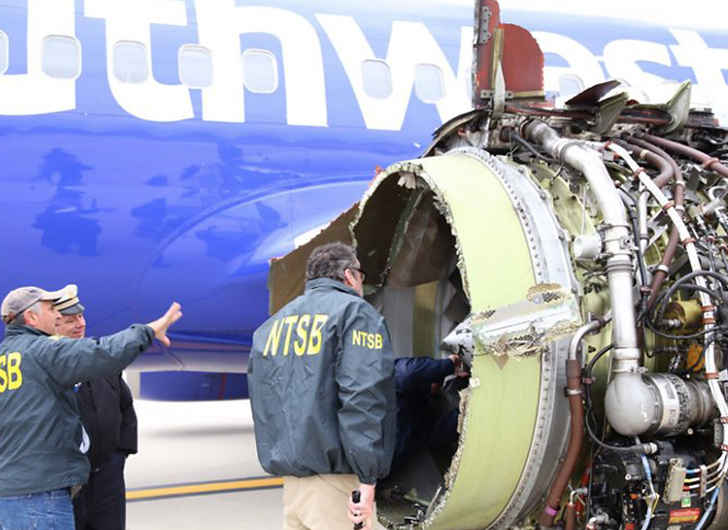 The pilot of the Southwest flight that was forced to make an emergency landing after it suffered engine failure has been praised for her “nerves of steel.”

"We have a part of the aircraft missing".
Pilot is incredibly calm and composed, the kind of pro you want to be in charge of an emergency landing.#southwest #flight1380

Former Navy fighter pilot, Tammy Jo Schultz, Southwest flight 1380’s pilot from New York’s La Guardia airport to Dallas was forced to perform an emergency landing in Philadelphia after debris from an engine failure broke open a window, almost sucking a passenger out of the hole.

Southwest Airlines confirms accident; our Hearts are with those affected: https://t.co/COJ6wR1GFe pic.twitter.com/Gr1xEN8nhc

Passengers scrambled to pull the passenger away from the hole and whilst a nurse who was on the plane performed CPR on the female passenger, she sadly died from her injuries.

“We started CPR on the lady, which we continued for 20 minutes,” Passenger Peggy Williams told CNN. “We were still doing CPR when the plane landed. We made every effort that we possibly could to save this woman’s life.”

Frightened passengers reveal feeling as though they were going to die, with some sending farewell text messages to friends and family. Many of passengers tried to block up the window hole with jackets and blankets – but those items were also sucked out of the plane.


“Everybody was going crazy, and yelling and screaming,” one passenger, Marty Martinez, told CNN. “As the plane is going down, I am literally purchasing internet just so I can get some kind of communication to the outside world.”

What a flight! Made it!! Still here!! #southwest #flight1380 pic.twitter.com/Cx2mqoXVzY

The pilot made an emergency landing at Philadelphia International Airport and requested emergency medics to meet the plane on the tarmac.

The pilot who steered #Southwest 1380 to safety after a harrowing engine failure today was was one of the first female fighter pilots in the Navy’s history, and the first woman to fly the F/A-18. Her name is Tammie Jo Shultz.

“I didn’t know what state the plane, or even the pilot was in, if we were in condition to land,” Martinez said. “Finally, when we…came to a halt, of course the entire crowd was in tears and people crying and we were just thankful to be alive.”