Crooked Forest.  This forest in Poland has very odd growing trees.  What caused these trees to grow like this is a mystery.
Eternal Flame Falls.  Due to a natural gas leak this waterfall in New York can be lit to produce a flame that is visible year round.  Occasionally the flame goes out and needs to be re-lit.
Red Beach.  This renowned tourist attraction in China brings 10's of thousands of visitors each year when the Suaeda Salsa plants bloom. 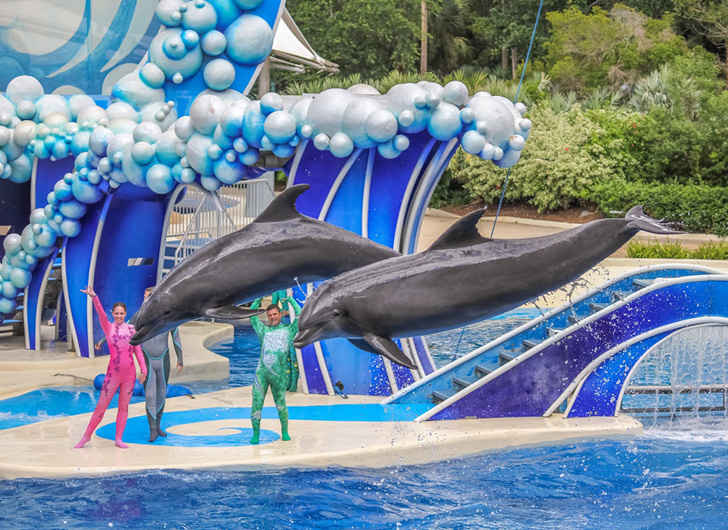 SeaWorld have announced they will end ‘Dolphin Surfing’ trainer tricks at all of their parks.

According to People, “dolphin surfing is a term used for tricks that include trainers riding through the water on dolphins by placing their feet on the backs or snouts of two swimming dolphins.”

Progress! #SeaWorld finally listened to PETA and will STOP using dolphins as surfboards.

Trainers will no longer stand on dolphins' faces or surf on them in SeaWorld’s circus-style shows! https://t.co/rs4shj57DL pic.twitter.com/olJpvfMVfb


“Following a months-long PETA campaign that included a damning veterinary report, a shareholder question asked by Alec Baldwin, numerous local ads, and more, SeaWorld admits in response to PETA’s latest shareholder proposal that it has stopped making trainers ride on dolphins’ backs and will soon end their practice of standing on dolphins’ faces in abhorrent circus-style shows. In response, PETA has withdrawn its shareholder proposal calling for an end to these cruel practices,” PETA revealed in a statement obtained by People. “Stopping trainers from treating dolphins like surfboards means less abuse at SeaWorld, but orcas and other dolphins continue to suffer in tiny concrete tank.”

In response to PETA’s statement, SeaWorld told People, “SeaWorld is continually evolving its animal presentations to create the best experience for both guests and our animals. As an accredited zoological facility, our leadership solely determines the content and format of our presentations and is not influenced in any way by the actions of ill-informed activists, who are seemingly more interested in their profile and fund raising than they are the welfare of animals.”