Did You Know?
Santa Cruz, California has a place where a cabin sits on a slope in a way that makes you feel as if you are always leaning forward.
Here in Land-bridge, Virginia you will find confederate and Yankee troops battling against dinosaurs, just like how it happened during the Civil War….
National Museum of Funeral History.  The National Museum of Funeral History is in Houston, Texas and features one-off coffins, and other funeral memorabilia. John Paul II's bulletproof pope mobile resides here!
NBA star Michael Jordan had many nicknames during his career, the most popular being “Air Jordan.” He earned this nickname for his leaping capabilities and ability to make huge dunks, especially in the Slam Dunk Contest. 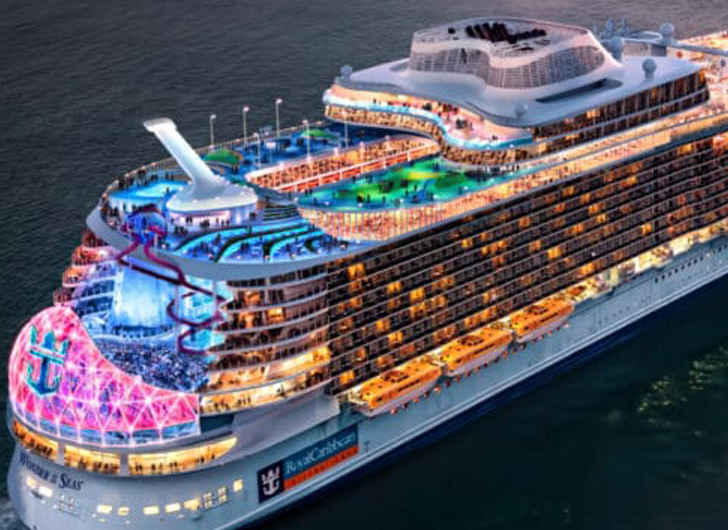 Weighing in at a whopping 236,857 gross tons and containing nearly 3,000 staterooms, Royal Caribbean’s newest cruise ship – the biggest in the world – will sail her inaugural cruise from Florida next month.

Royal Caribbean’s Wonder of the Seas is the company’s fifth Oasis Class cruise ship and has a maximum passenger capacity of 6,988 passengers together with 2,300 crew.


Comprising of 18 decks, the Wonder of the Seas took three years to build and contains an extra neighborhood onboard dedicated solely to suite guests, including an Ultimate Family Suite which can hold up to ten guests.

“Wonder of the Seas will energize cruising in a bolder and bigger way. Adding this ship to our already best-in-class fleet elevates the company in continuing to lead the industry with new features and innovation,” Jason Liberty, president and CEO of Royal Caribbean Group, said in a press release. “This is one more way that we’re delivering world-class and memorable vacations, responsibly, to guests around the world.”

The Wonder of the Seas will make its official inaugural sailing on March 4 out of Fort Lauderdale, Florida to begin 7-night cruises to the Caribbean. In May, the Wonder will head over to Barcelona, Spain and Rome, Italy to offer cruises in the Mediterranean before heading back to Florida for the winter Caribbean cruise season.