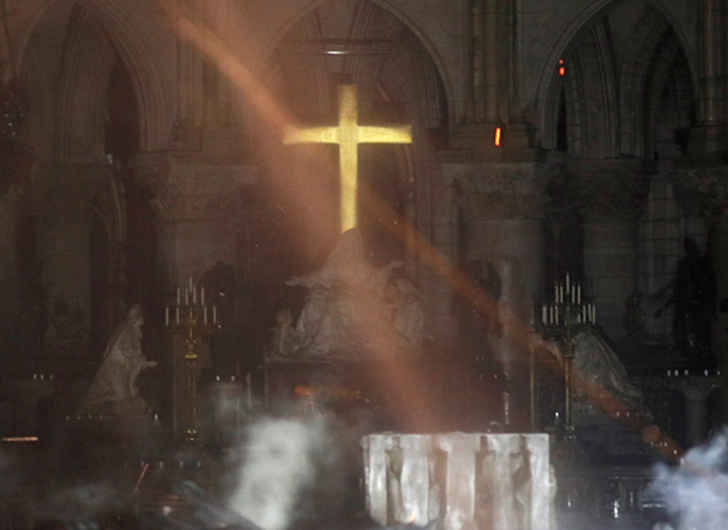 As fires swept through the iconic Paris landmark of Notre Dame Cathedral, another battle was being fought to save the priceless artifacts housed in the 850-year-old building.

Reportedly, almost all of the Historical Artifacts, Portraits, and Sculptures such as the Crown of Thorns are reported safe and were evacuated before the fire spread further in Notre Dame or were not impacted.

This is wonderful news. pic.twitter.com/9GygJHdsQl

Whilst the fate of all of the artifacts contained inside Notre Dame is unclear, several major artifacts have been saved and moved to the Louvre.

Paris Mayor Anne Hidalgo shared via Twitter many of Notre Dame’s sacred objects are safe, including most notably the “Crown of Thorns” – the crown believed to have been placed upon Jesus’ head before he was crucified.

USA Today is reporting The Tunic of Saint Louis (believed to have been wore by King Louis IX), and the famous statue of the Virgin Mary have also been saved from the inferno.

The Crown of Thorns and other objects were saved before the fire could get to them#notredame #holyweek pic.twitter.com/L5sH67r40n

There are, however, certain artifacts whose fate remain unclear, with the Times reporting it is uncertain whether the “True Cross” – a piece of wood believed to have been part of the cross used in the crucifixion – survived the fire.

According to People, Notre Dame has been at the center of religious and cultural life in Paris since 1365. The iconic cathedral draws around 13 million visitors per year.