Did You Know?
Richat Structure.  This 30-mile wide structure in the desert of Mauritania has an interesting shape.  Is it a huge fossil, or a spacecraft landing site?
Monolith Of Uluru.  This is the largest rock in the world, and it resides in Australia. All the rocks around it have eroded away, but for some reason this one has held its ground.
You can explore the world's largest plant maze at the Dole Plantation in Wahiawa, Hawaii.  The maze is a total of 2.5 miles long!
Enchanted Highway.  In Regent, North Dakota, there is a 32-mile stretch of some of the biggest scrap metal structures in existence. 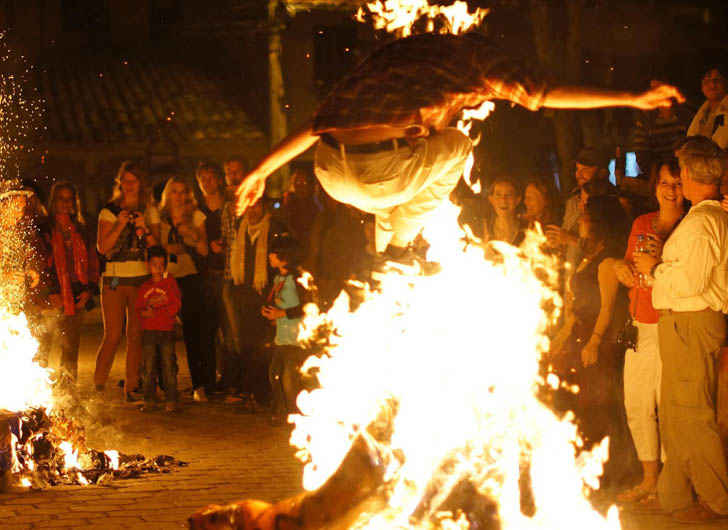 While many people think of heading to New York City, Sydney, or London to ring in the ultimate New Year, there are a few places where New Year’s Eve is full of weird and wonderful traditions.


From massive booze-fests and cities set a light, to freezing cold dips in an icy sea, these five destinations give adventurous travelers a New Year’s Eve to remember.


Fancy ringing in the New Year with rum and a swim in frigid seas? Head to the Isle of Man in the United Kingdom. This tiny island situated in the rough and cold Irish sea celebrates each New Year by having its residents jump into the frigid waters not once, but four times. In between each dip these hardy island folk take a shot of rum to warm the blood. Best of all, it’s all done to raise money for charity. Known as the New Year’s Dips, swimmers are often treated with hot tea and cookies following their frosty swim and many complete their dip wearing fancy dress!


This latin country rings in the New Year by setting fire to the old year. Across the country “ano viejo” (scarecrows) are assembled out of old clothes and newspaper. Once the clock strikes midnight people take their anger out on the “ano viejo” by punching and kicking it, before it is thrown on a huge pile with other ano viejo’s and set on fire. Ecuadorians view this as symbolic – they are cleansing the bad from the past 12 months in order to have a fresh start for the new year.


For those looking to skip the excessive drinking of New Year’s Eve and get back to nature, Mount Takao in Japan is the perfect place to ring in a new year. Located just an hour away from Tokyo by train, hundreds make the ascent to the top of Mount Takao to see the first sunrise of the new year. As spectators watch the sun come up on a new year, local priests conduct a service to honor their “Festival to Welcome the Light.”

#Reykavik during the #holidays is magical. Lights adorn the windows, trees, and snow-filled streets. The days are short, but the nights are alive. 🇮🇸 #iceland #pplights @passionpassport #travelgram #instatravel #holidaytravel #wanderlust #traveldeeper #happyholidays


Residents of Reykjavik, Iceland don’t let the lack of daylight hours hold them back in ringing in a new year. All across the city various neighborhoods construct community bonfires, which they later gather around singing, eating and playing music. As the clock nears midnight they assemble to watch hundreds of fireworks light up the sky before heading to pubs and clubs, which normally stay open until the wee hours of New Year’s Day!


South Africans don’t just try and cram their New Year’s entertainment into one night. Instead they party hard for three days, starting on New Year’s Eve starting with extravagant parties at the Victoria and Alfred Waterfront and ending on January 2 with the Cape Town Minstrel Carnival. Around 10,000 performers sing, dance and parade their way through the streets of this South African country in the tradition which dates back to the early days of the slave trade. Cape Town is blessed with balmy temperatures in the high 70’s during December and January, making it the perfect city to dance the night away.