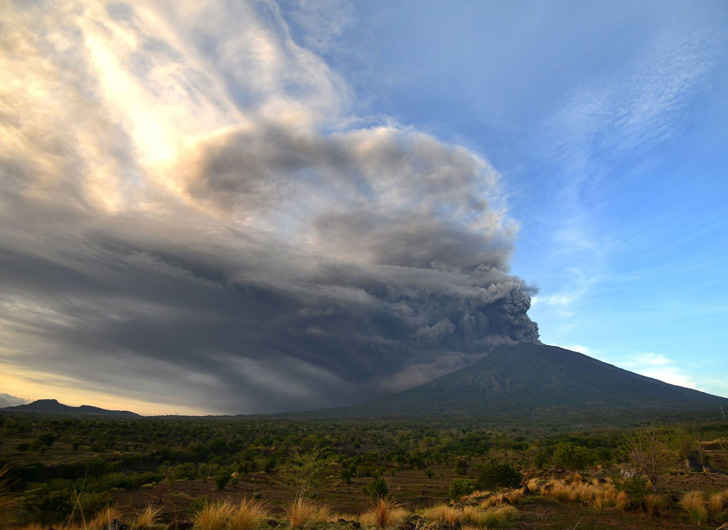 The tropical resort paradise of Bali is currently under a huge ash cloud as the island’s volcano, Mount Agung, erupted over the weekend sending plumes as high as 3.7 miles.

The eruption has caused a massive evacuation on the Indonesian island, with over 100,000 local residents living in the volcano’s danger zone.

Currently all flights to Bali are diverting because the ash cloud from #MountAgung has reached Denpasar Airport pic.twitter.com/eHXjrwpoPd

Tourists who were looking forward to unwinding on the beautiful island have been forced to abandon their vacations as more than 445 flights have been cancelled, affecting over 59,000 passengers. Many tourists on the island are now forced to leave their hotels and seek refuge in local evacuation shelters.

The island’s main airport, Denpasar Airport, released a statement saying the airport would remain closed until Tuesday morning and would reopen after reassessing the situation.

Mount Agung erupted on Saturday and a further three times on Sunday sending volcanic ash 13,000 feet into the sky according to Reuters.

DEVELOPING: Bali's largest volcano could be about to explosively erupt; 75,000 people have been evacuated from their homes. The last time Mount Agung erupted in 1963 it killed more than 1,000 people pic.twitter.com/KO4rKyzQa7

Indonesia sits on the Pacific Ocean’s Ring of Fire and has more than 120 active volcanoes. Mount Agung last erupted in 1963 and killed more than 1,000 people.