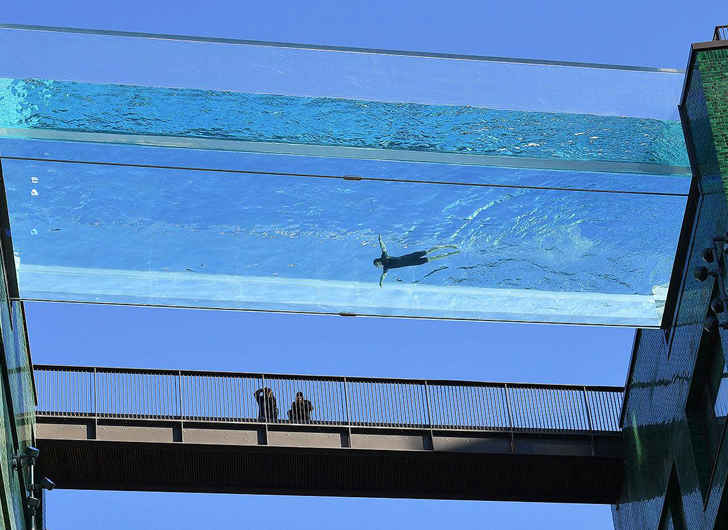 Daredevil alert! How would you like to take a dip in a swimming pool suspended 115 feet in the air? If the idea sounds thrilling you may want to head to London where the “World’s First Floating Pool” has opened.

The Sky Pool links the 10th stories of two buildings at the Embassy Gardens complex in the Nine Elms neighborhood of South London and, according to the website, is the largest freestanding acrylic structure in the world.

Swimmers enjoy warm weather in London at the Sky Pool which is believed to be the world’s first transparent pool built between two skyscrapers
https://t.co/mtRX8qvt0a pic.twitter.com/2skTGK9Jp7


“It was an idea that really stood out and that we thought was quite special,” Embassy Garden’s developer Ballymore Group CEO Sean Mulryan said in a press release. “It’s only because of advances in technology that we’re able to do this. Swimming in it will make you feel like you’re floating in air.”

According to Travel+Leisure, the pool has numerous lighting modes and the rooftop area is home to a spa and a bar.

Not only do bathers feel as though they are swimming in mid-air, but the pool also offers breathtaking views of the London skyline. Sadly, however, you will need to be a guest of an Embassy Garden resident if you want to take a plunge.