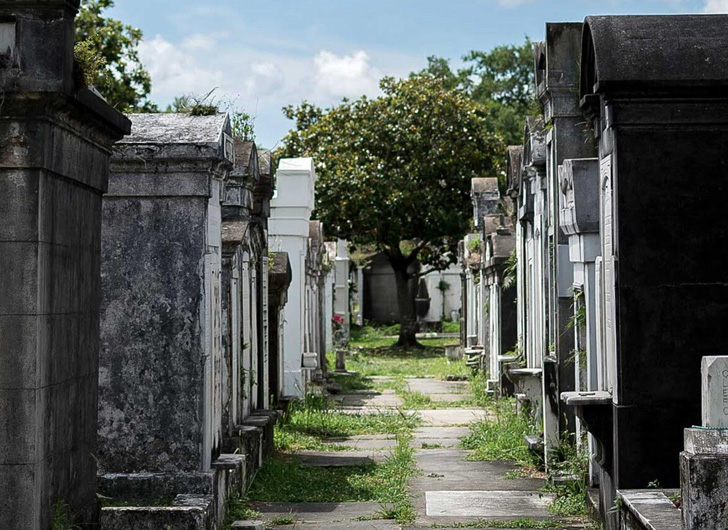 There is nothing spookier than a graveyard at night and when it comes to the most haunted graveyard in America nothing compares to the crumbling tombs and crypts located inside the St. Louis Cemetery #1 in New Orleans.


New Orleans is known to be full of ghosts, but St. Louis Cemetery #1 is deemed one of the most haunted places in the whole of America. The cemetery is no longer open to the general public unless they are accompanied by a licensed guide – and with good reason! The 300-year-old graveyard is reported to be haunted by hundreds of ghosts, including the famous Voodoo Queen Marie Laveau.


Visitors to St. Louis Cemetery #1 have reported seeing Marie Laveau – who was one of the most famous Voodoo practitioners in America – donning her unmistakable red and white turban and brilliantly colored clothes, but when they try to follow her she simply vanishes from view. For some ghost hunters, Marie Laveau is less than friendly and has been known to pinch, scratch, and even push some cemetery visitors to the ground. This hasn’t stopped cemetery visitors in the past from marking her tomb with three white x’s while asking her to make their wish come true. Due to the vandalism of her tomb, the cemetery is no longer open to the public unless they participate in a licensed tour.

Another ghost who regularly appears amongst the eerie tombs of St. Louis Cemetery #1 is that of Alphonse, a spirit trying to find a place to rest his soul. Visitors report being taken by the hand while Alphonse asks them to bring him home. His spirit is also known to take flowers from other graves to place on his tomb.

Ghouls and ghosts aside, St. Louis Cemetery #1 is so eerily spooky it was used in the movie Interview With a Vampire and famous American author Mark Twain once referred to the graveyard as “the Cities of the Dead.”