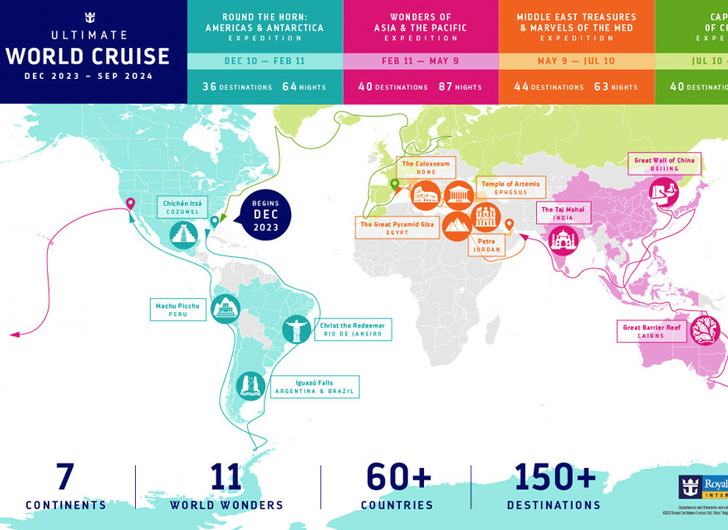 Royal Caribbean has announced the “World Cruise of World Cruises” which will transport passengers to more than 150 destinations over the course of nine months via its spectacular Serenade of the Seas ship.

The magnificent sailing has been dubbed the “longest and most comprehensive world cruise” ever with Royal Caribbean labeling the sailing the “Ultimate World Cruise.”


Lucky passengers will traverse the globe aboard the Serenade of the Seas on the mega 274-night cruise which will depart on December 10, 2023, from Miami, Florida.

“Now more than ever, people have resolved to travel the world and make up for lost time. Royal Caribbean is making that a reality with the ultimate vacation that welcomes those seeking adventure and exploration to taste, dance and dream with us around the world,” Royal Caribbean International CEO Michael Bayley said in a statement reported by USA Today “To travelers asking themselves where they should go next, we say everywhere.”

And by “everywhere” Bayley means all seven continents, including Antarctica!

Passengers will visit more than 150 destinations across 65 countries before disembarking back in Miami on September 10, 2024.

For those unable to spend 274 nights aboard a cruise ship, Royal Caribbean is allowing passengers the opportunity to book one of four segments of the cruise separately. These include:

Round the Horn: Americas and Antarctica Expedition – sailing from Miami to the Caribbean before rounding Cape Horn to Antarctica. From there, passengers will discover three world wonders in South America before heading to the Yucatan Peninsula.

Wonders of Asia and the Pacific Expedition – discover Hawaii, Mo’orea, Tahiti, and Australia’s famous Great Barrier Reef before heading to the Great Wall of China, the island nation of Japan, and India’s romantic Taj Mahal.

Middle East Treasures and Marvels of the Med Expedition – revel in the glamour of Dubai and immerse yourself in the history of Egypt before traversing the glorious Mediterranean on the way to Barcelona, Spain.

Capitals of Culture – continue along the Mediterranean as you take in Spain and Morocco before heading north to Scandinavia and Iceland. A transatlantic crossing will transport passengers to Bermuda, the Big Apple, and Royal Caribbean’s Perfect Day at CocoCay private island before docking back in Miami.