Did You Know?
Marble Caverns.  In Chile these marble caves are a result of saltwater erosion.  The water is so clear the bottom is viewed easily.
National Museum of Funeral History.  The National Museum of Funeral History is in Houston, Texas and features one-off coffins, and other funeral memorabilia. John Paul II's bulletproof pope mobile resides here!
In Louisville, Kentucky this cemetery, which seems to be a continuous labyrinth, tries to make an impression of the people put here long after their death.
This piece of fashion jewelry is known as the mood ring which contains a thermochromic element, such as liquid crystal, that changes colors based upon the temperature of your finger. It comes with a color chart to identify what 'mood' you were in. 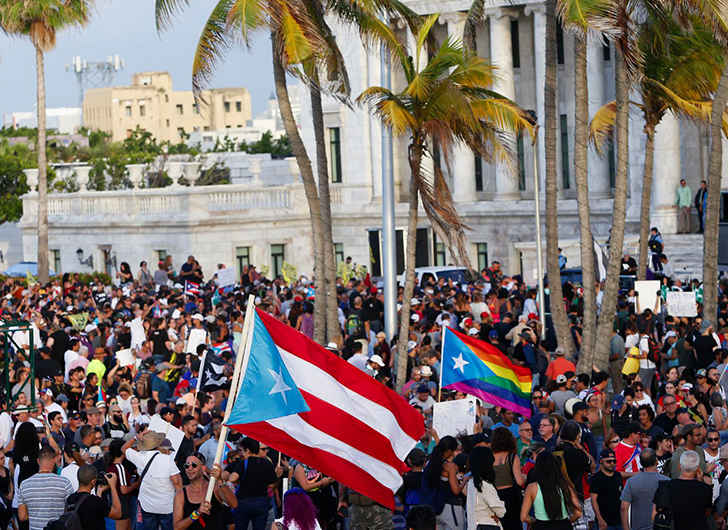 Ongoing protests in Puerto Rico have forced Royal Caribbean to cancel one of its cruise ships ports of call to San Juan.

According to the Miami Herald, the Empress of the Seas has instead been re-routed to Tortola in the British Virgin Islands after ongoing protests calling for the resignation of the governor have rocked San Juan over the past few days.

“In light of current unrest in San Juan, Puerto Rico, we have canceled today’s call to San Juan,” Royal Caribbean spokesman Owen Torres told the Miami Herald. “Empress of the Seas has been re-routed to Tortola, and our guests will receive refunds for prepaid shore excursions. We continue to monitor the situation closely and will make adjustments as necessary to ensure the safety and security of our guests and crew.”

Protestors have taken to the streets of San Juan calling for the resignation of governor Ricardo Rosselló after hundreds of pages of profane group chats between close aides and cabinet members were leaked and published by the Center for Investigative Journalism in Puerto Rico, according to the Miami Herald. Similar protests have taken place in New York, Florida, and Washington D.C.

Although no other cruise companies have made changes to their itineraries, if you are booked on a cruise set to visit Puerto Rico within the next couple of days you may want to check with your cruise line especially if you have score excursions booked.