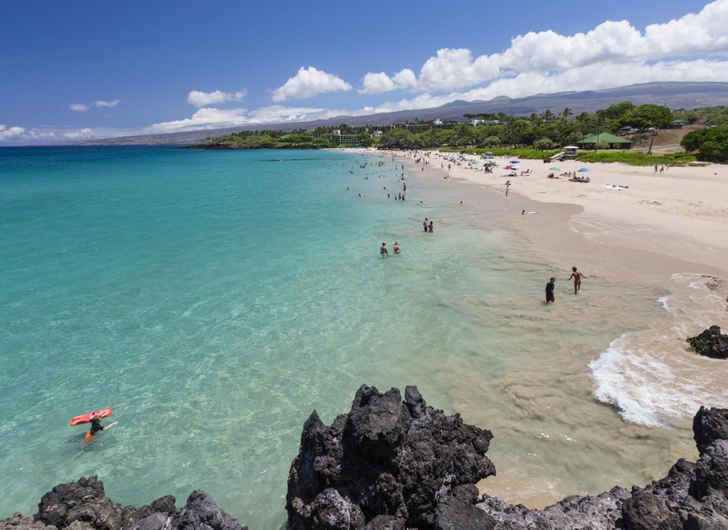 Dr. Beach is back with his annual Best Beach pick – and this year’s choice may require a little more effort to get to.


Located on Hawaii’s Big Island, Hapuna Beach is “like an oasis” in a shoreline dominated by ancient volcanic landscapes and the contrast of the white sand beside the black lava makes people feel like they have arrived in paradise.

“I think the contrast makes you think, ‘Oh my gosh, I’ve never seen sand so white in my life.,’” Dr. Beach said.

“Hapuna Beach, a beautiful coral sand beach, seems incredibly white, partly because of the sharp contrast with the black lava rock that flanks and bounds this half-mile pocket beach,” Dr. Beach said in a press release. “During the summer months the beach swells to over 200 feet wide, sloping gradually into the offshore waters. The crystal-clear water is a perfect place to swim, snorkel or scuba dive.”

“In the winter during big wave days, pounding shore breaks and rip currents make swimming impossible,” Dr. Beach added. “At these times, I enjoy riding the rapidly moving swash of the broken waves up the beach face on a boogie board; the key is to stay in the shallow water far from the breakers so that you are not swept back into the ocean. All Hawaiian beaches are no smoking.”

According to the Associated Press, Dr. Beach uses 50 criteria when compiling his annual “Best Beach” list, with the most important categories being safety and cleanliness and that means cigarette smoking on beaches is a big no-no.

“First of all, it’s a health issue,” Dr. Beach said. “But the biggest thing is disposal of the cigarette butts. People look at beaches like a giant ashtray.”

These are the top ten “Best Beaches” in America for 2021, according to Dr. Beach: